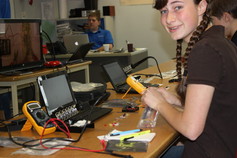 Below you can find all of the materials that we developed for our first Engineering Boot Camp event, which covered an introduction to the following topics:

First held on 13-July-2013, this seven-hour-long intensive workshop focuses on the EDGE Tilt-O-Meter project, a device that looks at the output of a three-axis accelerometer, and illuminates a combination of 9 LEDs according to how the board is tilted.  We designed the project to be scoped appropriately for a true beginner, with enough potential for some cool expansion, and it seems that the design achieved that goal.  In our first run, all but one of the Tilt-O-Meters was fully operational by the time we were done, and that one was brought up to speed soon after the event was over.

The EDGE Research Lab team couldn’t have done this without generous support from Sparkfun, the willing help and hosting of Bill Schmidt (technology teacher at Dakota Ridge High School), Scott Johnson (mentor to Team 1799), and the Jefferson County School District. It also bears mentioning again that the families of the EDGE team members are truly essential to what we do.

Course Description Document: The first thing that we make when designing new curriculum - the foundation for the entire event

Presentations: All of the static material that we presented on the big screen (note that a lot of the Boot Camp was interactive, and therefore not captured in presentation format)

Assessments: The tools that we used to evaluate how successful Boot Camp I was

Parts List: Takes you to the SparkFun Wish List so you can build your own Tilt-O-Meter (note that we didn't use the breadboard from SparkFun, we used this one from Amazon)

Source Code: Download the code that we wrote for the Tilt-O-Meter (the students wrote their own code with as little guidance from us as possible - consider this the answer key)

We administered the assessments before and after Boot Camp I, to see if the students thought that they were better equipped to handle engineering challenges as a result of their participation.  We think the numbers speak for themselves (taller bars mean more confident students): 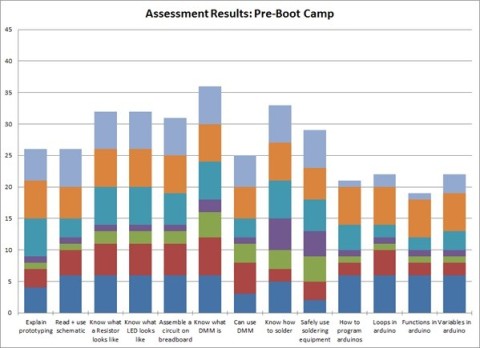 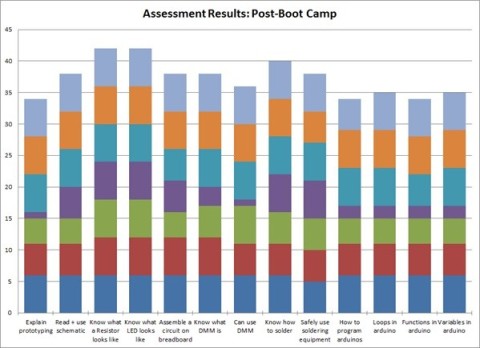